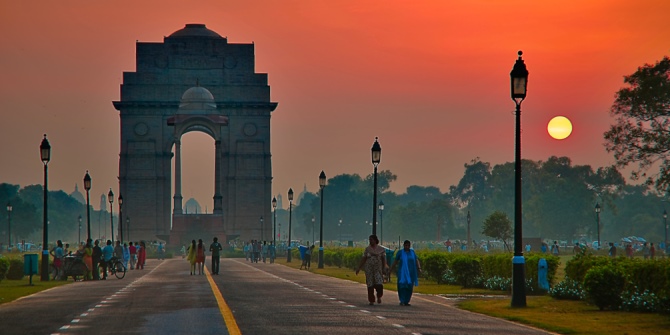 “We end today a period of ill fortune and India discovers herself again. The achievement we celebrate today is but a step, an opening of opportunity, to the greater triumphs and achievements that await us. Are we brave enough and wise enough to grasp this opportunity and accept the challenge of the future”- Jawaharlal Nehru (14th August 1947)

India, the second largest democratic country in the world with the population of around 1.1 billion and it is seventh largest country of the world. India’s independence from the British rule since 1947 drove it into many conflicts, struggles and setbacks which became hindrance in a way of success and stability of the state. In Cold War period, India announced its policy of Non-Alignment Movement and refused to become the part of any bloc but shared good relations with Soviet Union back then. With the collapse of Soviet Union in 1991, India realised to look beyond its borders for support and assistance to fulfil its national interests. The main events which brought major shifts in Indian foreign policy were 1962 Sino-Indian War, China’s nuclear test, tussle with arch rival Pakistan in 1965, 1971 and 1999 respectively which totally changed the face of Indian foreign policy. The new leadership in 1990s neither denounces Nehru’s foundation of foreign policy nor completely rejected his ideas which he laid as the guiding principles of Indian policy, but they continued to improvise and modernise India’s foreign policy to suit the new requirements of the contemporary world. Economic reforms were introduced in India in 1991, which lead country on the path of economic growth. Before that the economic growth of India was slow and not up to the mark to achieve its national interest of becoming stable power in the region. The Indian economy has grown around 6% annually over past few decades and is among the fastest growing rates in the world. The improved economic conditions boost the middle class and increased the GDP, exports, imports and foreign investments which were appreciated by the entire world specifically its rise, developed and developing states view India as the great trading partner with massive potential which will improve the economic terms of nations.

The 1991 Gulf war and collapse of USSR confronted India with shocking effects, it lost access to European markets, oil prices skipped, and considerable number of Indians were sent back to home. These economic shocks forced India to rethink its national economic policy and foreign policies. Afterwards India started to introduce greater economic liberalisation and diplomatic diversity and for that India looked up for engagement with other economically strong nations like China, U.S, Japan and Israel through its policy of “look East policy “which is playing vital role in strengthening its economic and strategic position in the world politics. Indian diaspora around the world is relatively rich, successful and well-integrated which is promoting the soft image of India. This became the driving force in economic growth through remittance money estimating around 8 billion only from Indians settled in six Gulf States.

India lies in the Indian Ocean which is considered as one of extraordinary potential for growth in terms of transatlantic commerce with many states through sea trade routes which are passing through or close to Indian territorial waters. According to George Curzon “The central position of India, its magnificent resources, its teeming multitude of men, its great trading harbours, its reserve of military strength, supplying an army always in a high state of efficiency and capable of being hurled at a moment’s notice upon any point either of Asia or Africa-all these are assets of precious value. On the West, India must exercise a predominant influence over the destinies of Persia and Afghanistan; on the North, it can veto any rival in Tibet; on the North-east it can exert intense pressure on China and is one of the guardians of the autonomous existence of Siam. Possession of India gave the British Empire its global reach”. These are few dimensions given by George Curzon of British empire which will help India in achieving its regional and global attribute of great power.
The economic development in India followed the socialist structure for many years after its independence from British rule in 1947. This included sate-ownership of many sectors and its per capita income was only 1% annual rate for almost three decades in post-independence period 86. Then in mid-1980s, India slowly moved towards the market liberalisation and more major reforms were introduced in 1991 when India moved towards the more progressed free market economy. After these reforms, India’s growth rate reached to 7.5% in the late 2000s eras. India is the sixth largest economy of the world and third largest by purchasing power parity adjusted exchange rates 87.

The Indian Economy has the potential to become the third largest economy of the world in next few decades because its long-term growth perspective is positive due to its young population, low dependency ratio, savings and healthy investment rates and its increasing integration into the global economy. According to International Monetary Fund (IMF), India’s growth is expected to be bounce to 7.2% in the 2017-18 fiscal and 7.7 % in 2018-18 year. India having one of the fastest growing service sectors in the world like it is a major exporter of IT services, Business Process Outsourcing (BPO) services and software services with $167.0 billion worth of service export in 013-14. The IT industry of India is continuing to be the largest private sector employer in the country. India is also third largest hub of start-ups in the world with over 3,100 technology hubs in 2014-1589. The agriculture is also contributing in the economic growth of India and its ranks second worldwide in farm output. The industry has constant input in the economic growth of India and its automobile industry is the one of the largest in the world with the production of 21.48 million vehicles in final year 2013-1490. India’s E-Commerce and retail market is growing with every passing day which will lead India to soon compete with economic giants of the world and with China which is right now ahead of India in its economic progress. India’s current economic growth has improved its standing on world political stage, even though it is still a developing country but one which is showing strong development on every sector. Many nations are moving to develop good ties with India based on its excellent economic performance in last few decades. India’s primary sector is growing at 9% per year and is the world second largest producer of food. India is still a smaller player in manufacturing industry and lot more needed to improve its performance in this sector in future, however this sector is growing at 11-2%. India has strong foothold on IT sector and is called as “Information Technology superpower” which is possible due to the presence of large pools of highly skilled, low cost, English speaking workforce.

India’s quest to become the regional hegemon is not a new phenomenon, for long India desired to achieve the status of regional hegemony but it remained unsuccessful for two main reasons. First, India’s historical rival Pakistan regularly challenged its efforts to do so and Islamabad actively gain support from China and United States to undermine India’s material power advantages. China’s support to Pakistan was due to its rivalry with India, while U.S supported Pakistan for its quest to achieve larger global and security objectives in the South Asian region. The major powers support for Pakistan did not target India directly but it diminishes India’s regional majority by contributing to the military power of Pakistan. The second reason which came in way of India quest for regional hegemony was the presence of British naval force in the India Ocean during cold war era and then US from the 1970s onward. This makes regional hegemony of India, in waters nearly impossible.

If aspire to attain the status of regional hegemon, it would have to deal with the outstanding rise of China who is very much ahead of India in every sector. China’s good economic relations with the neighbouring states of India, is worrisome factor for New Delhi’s regional interests which are transforming China into South Asian/Indian Ocean power. The emergence of new great powers will make it difficult for India to become viable hegemon on the South Asian region. Despite India’s rapid economic development after 90s, it can be said that India both have relations with first class nations in west and worst third world states within the borders which is creating human security challenge for India. India’s infrastructure is improved in last few years, but it still needs to become more improved. India’s delay in the improvement of social infrastructure like health and education drives the second largest democracy to the separatist movements like Naxalite and Khalistan movements by Sikhs of India which are greater security challenge. In 2010, India explained Naxalite movement as the biggest internal threat faced by India. These domestic issues and conflicts posed threat to India’s hegemonic desire and is hindrance in its way to rise as a great power.