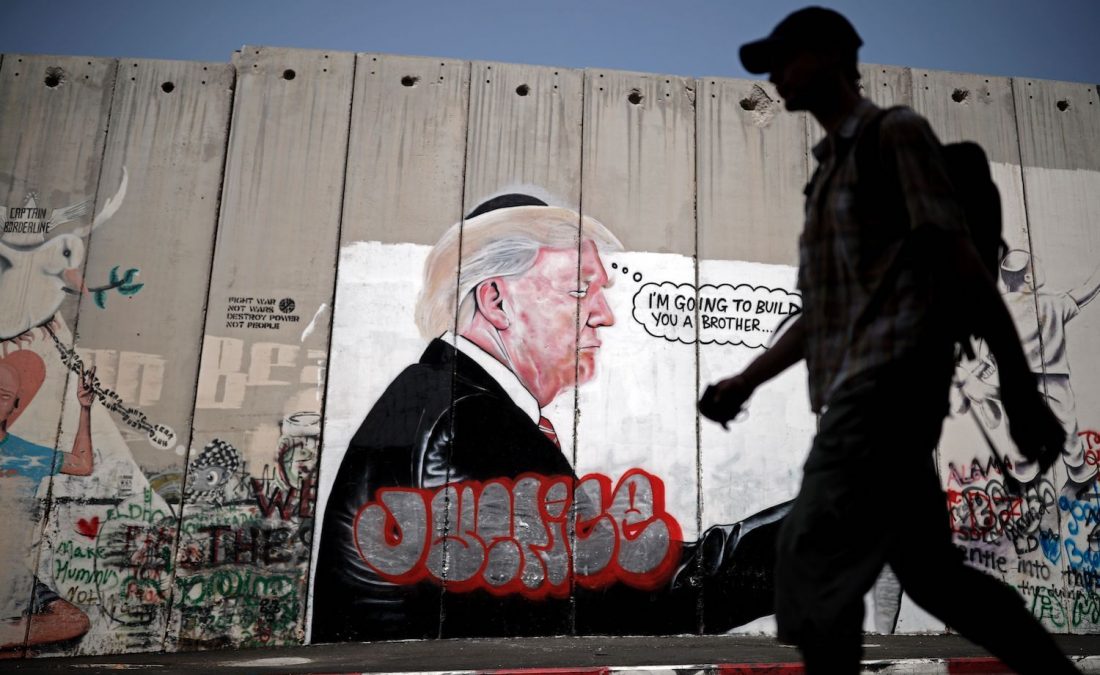 The United States has forfeited its authority as a neutral broker. It may be time for the Palestinian street to have its say.

We’re in trouble. The world, that is. Or at least those who pray for peace in Jerusalem and in the Holy Land.

Some track the current conflict back 100 years to a November 1917 British declaration — cursed by some, commemorated by others. Others to a November 1947 decision to partition Palestine into a Jewish state and an Arab state. But in the future, we may look back at Trump’s Jerusalem announcement this past week as a key turning point.

Before we get to the impact of Trump’s announcement, it’s essential to understand the current chapter of Israeli/Palestinian relations — both hope and hate — that began almost exactly 30 years ago. On Dec. 9, 1987, an Israeli military jeep plowed into a Palestinian vehicle in the Gaza Strip’s Jabaliya refugee camp, killing four. And when the Palestinian public in the West Bank and Gaza — from angry youth to conservative shopkeepers to progressive lawyers — rose up against the Israeli military occupation that dominated their lives, a civilian resistance that was part sit-ins and strikes, part rock-throwing, and part Molotov cocktail was born.

Imperfect as it was, it was that uprising — painful and hopeful — that was embraced by the West Bank and Gaza’s Palestinian society and spurred a series of events that led us to where we are today.

It was that 1987 uprising that inspired the Palestine Liberation Organization to bravely accept compromise via an emotional November 15, 1988 “Declaration of Independence” from their 1964 goal to “liberate Palestine” and achieve a “complete restoration of [their] lost homeland” to accepting even less than the 1947 partition — a state only on the West Bank and Gaza — a mere fifth of the Holy Land.

It was that 1987 uprising that transformed the Palestinian political position from the unrealistic to the pragmatic.

It was that 1987 uprising that transformed the Palestinian political position from the unrealistic to the pragmatic.

And the world took notice. Ordinary citizens in the Arab world were inspired by the prospects of people power. In a moment when the unthinkable was happening — the Berlin Wall fell, Nelson Mandela was released from prison — why couldn’t the age-old Israeli-Palestinian conflict be solved once and for all? And so U.S. President George H. W. Bush, with the wind of his success in liberating Kuwait at his back, brought together Israeli, Palestinian, and other Arab leaders at the Madrid Conference in the fall of 1991 based on the premise that the parties could negotiate a solution.

It was that 1987 uprising that a few years later, in 1993, inspired sworn enemies — Israeli Prime Minister Yitzhak Rabin and Palestine Liberation Organization Chairman Yasser Arafat — to shake hands on the White House lawn and sign the Olso Accords under the auspices of U.S. President Bill Clinton.

All of this was a result of the collective response of Palestinian civil society in the form of an uprising against their completely unsatisfactory situation. Then it was Israeli military occupation. Today it’s a failed peace process. It’s important to remember that uprising, because that force can rise up again.

But now, three decades and thousands of Israeli and (mostly) Palestinian deaths later, the hoped-for peace resulting in two states built on the cry of Palestinian civil society for dignity and independence, and the aspirations of Israelis to finally be accepted by the Arab world in a secure state of their own, is in deep trouble. Countless peace efforts — from Annapolis to Aqaba, including one I personally worked on under the auspices of Secretary of State John Kerry, and even an Arab Peace Initiative failed to achieve further progress.

Even before President Trump’s announcement, the Israeli-Palestinian peace process was already on the precipice

Even before President Trump’s announcement, the Israeli-Palestinian peace process was already on the precipice

: Palestinians were increasingly despondent that facts on the ground meant that it was no longer possible to achieve a state of their own in the West Bank and Gaza. Israelis themselves seem to have turned away from two states: Just weeks ago, Prime Minister Netanyahu stated firmly, “the Jordan Valley will always remain part of Israel. We will continue to settle it.” Indeed, the number of Israeli settlers in the West Bank’s 130 settlements has expanded from 270,000 when the 1993 peace deal was signed, to 400,000 today; 600,000 if East Jerusalem is included. But it’s not just the overall number of settlers. It’s about where they live. About 90,000 live deep in the West Bank on the Palestinian side of the Security Barrier, a number that rose 20,000 during the Barack Obama administration. As time passes, the situation becomes ever more complicated. Soon, we’ll reach a tipping point where neither Israelis nor Palestinians believe separation is possible.

Turning back to today, why is the status of Jerusalem such a massive deal? Deeply held religious views make Jerusalem absolutely vital to Christians, Jews, and Muslims around the world — and to Israelis and Palestinians on the ground. Decades ago, the international community wisely decided that since no group could live without it, everyone would need a stake in Jerusalem — by sharing it in some meaningful way — for peace to even have the possibility to prevail.

This article was first published by foreignpolicy.com on December 11, 2017.